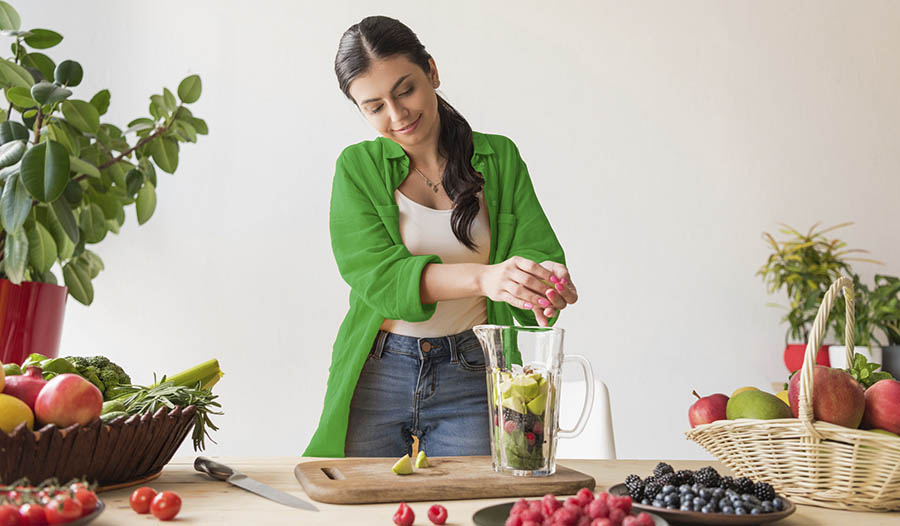 Polycystic ovarian syndrome, commonly known as PCOS, is a condition that’s believed to affect up to 10 percent of women between the ages of 16 to 45 worldwide. Women who have PCOS frequently have higher than usual insulin blood levels and carry excess weight, which contributes to many hormonal changes in the body, resulting in excess hair growth, acne, menstrual irregularities, and fertility challenges.

It appears that there are many causes of PCOS. First, a diet high in processed foods, sugar, high- fructose corn syrup, colas, and simple carbohydrates are known to increase one’s body weight. This can lead to insulin resistance and other changes to one’s hormones and endocrine system in a way that contributes to PCOS. Pre-diabetes and elevated blood sugar are also believed to contribute to PCOS.

Another contributor is hypothyroidism, or underactive thyroid, a condition which can affect up to 10 percent of women. It has been suggested that some women with an underactive thyroid are at increased risk for developing polycystic ovarian syndrome. Environmental toxins may also contribute to hormonal abnormalities. Studies have linked Bisphenol A or BPA, a chemical found in many plastics, to the development of PCOS in women.

The diagnosis of PCOS can occur clinically by a doctor, based on the presence or absence of the above symptoms. Once the diagnosis is suspected by a healthcare provider, many will conduct additional laboratory or ultrasound testing to further confirm and characterize the condition.

Lifestyle changes can help restore balance to a woman trying to improve her hormone and metabolic profile. These include the following:

Doctors will frequently prescribe medications to help lessen the impact of PCOS and to help improve the metabolic and hormonal profile of women who are diagnosed with the condition. Some of the most commonly prescribed treatments include the following:

Metformin – Frequently used for diabetes, this medication helps make insulin produced in the body more efficient. Since most women with polycystic ovarian syndrome have insulin resistance, this medication frequently may help restore a woman’s menstrual cycle back to normal.

Clomiphene – This medication helps women with PCOS to ovulate and achieve pregnancy.

In addition to diet and lifestyle changes that can help improve symptoms and help restore woman’s metabolic and hormone profile closer to normal, many women consider supplements to help optimize their health. Many take prescription medications in addition to their supplements, which include the following:

Almost four in five women worldwide are deficient in vitamin D, frequently known as “the sunshine vitamin”. Low vitamin D levels are associated with many diseases.

Chromium is an important element required for numerous enzyme reactions, including an enzyme called the glucose tolerance factor, or GTF. This enzyme helps optimize insulin function and glucose control.

A 2017 meta-analysis study in the Journal of Trace Elements in Medicine and Biology concluded the supplementation with chromium picolinate had beneficial effects in reducing body mass index (BMI), fasting insulin levels, and total testosterone levels in women with PCOS. Elevated insulin levels are associated with fat storage and weight gain.

Likewise, a 2015 double-blind, placebo-controlled trial in the Annals of Nutrition and Metabolism showed that chromium supplementation lowered insulin levels in women with polycystic ovary syndrome. Those who took the chromium also saw improvements in their cholesterol profile. However, a 2018 study did not find significant improvement in PCOS symptoms in women who took chromium. More research is needed.

Suggested dose: 200 mg once or twice per day

NAC is an important nutrient which helps the body to eliminate toxins. Doctors give this supplement to patients hospitalized in response to acetaminophen/paracetamol (Tylenol) overdose.

L-carnitine is an important amino acid found in high concentration in both muscles and the brain. It also plays an important role in the production of energy and metabolism. A 2015 randomized, double-blind, placebo-controlled study of 60 women with PCOS was conducted. All were considered overweight. Half the women were given 250 mg of L-carnitine, the other thirty women were given a placebo pill. Both groups were followed for 12 weeks, and at the end of the period, those who took the carnitine saw a reduction in weight and waist circumference and had lower blood sugar.

A 2014 study in the European Journal of Obstetrics and Gynecology and Reproductive Biology demonstrated that women with PCOS who were resistant to clomiphene, (meaning this prescription drug could not help them become pregnant) were more likely to become pregnant when 3,000 mg of L-carnitine was added to their daily drug regimen. This is an excellent example of using both nutritional supplements and prescription drugs to achieve the desired health goal.

This popular supplement plays an important role in energy metabolism. A 2017 double-blind, placebo-controlled study in Clinical Endocrinology evaluated the use of 100 mg of coenzyme Q10 versus placebo in women with PCOS. The subjects underwent blood tests, took the supplement or placebo for 12 weeks and then underwent repeat blood testing. The results showed that those who took the co-enzyme Q10 had a reduction in blood sugar and insulin levels, which are both normally high in those with PCOS. A 2015 study also showed that clomiphene-resistant patients taking co-enzyme Q10 were more likely to ovulate and become pregnant.

Omega-3 essential fatty acids consist primarily of, particularly, eicosapentaenoic acid (EPA) and docosahexaenoic acid (DHA). These important nutrients can be found in a variety of food sources, which include fish (mackerel, cod, and salmon are among the richest), walnuts, chia seeds, flax seeds, hemp seeds, avocado, and natto.

Selenium is a trace mineral, meaning that is it required in small amounts by humans. According to a 2013 study of women in Turkey, those with PCOS had lower selenium levels in their blood when compared to women without PCOS. It is believed that this mineral deficiency plays a role in the cause of PCOS and the regulation of hormone levels. The researchers also found that lower levels of selenium were associated with increased levels of Luteinizing hormone (LH) and testosterone, both abnormalities common in PCOS.

A 2014 randomized, double-blind, placebo-controlled study showed selenium could be helpful in women with PCOS. Specifically, selenium could lower insulin levels and help improve cholesterol profiles, such as lowering triglycerides and LDL (bad) cholesterol.

Suggested dose: 200 mcg daily (can be found as a separate supplement or in most multivitamins)

Polycystic Ovarian Syndrome or PCOS is a common condition in women who are of childbearing age. PCOS can result in hormonal abnormalities and irregular periods, which can make it difficult for women to become pregnant and bear children. Diet and lifestyle changes play a crucial role in helping reverse symptoms of PCOS, but when not sufficient, prescription medications and certain supplements may also be considered and used in combination to achieve optimal results.

Fibromyalgia, sometimes referred to as Fibromyalgia Syndrome or FMS, is a chronic pain syndrome characterized by muscle aches, general pain, and fatigue. The muscle aches, called myalgias, are usually diffuse and felt throughout the body. Fibromyalgia affects approximately 10 million people in the United States. Worldwide, more than 100 million are affected, ninety percent of which are women. Studies show 68 percent of those with fibromyalgia have tried nutritional supplements to help with their symptoms.

Have Gas And Feeling Bloated? Here's What Your Gut Is Telling You

Excessive gas and bloating are common digestive complaints that usually respond very well to natural solutions. Look out for these signs to find the root of the issue.

These Herbs, Spices and Nuts Could Help with Diabetes Management

Worldwide, more than 422 million people have diabetes. The vast majority—90-95 percent— have type 2 diabetes, a condition primarily due to lifestyle factors, like consumption of excess sugar, and limited physical activity.