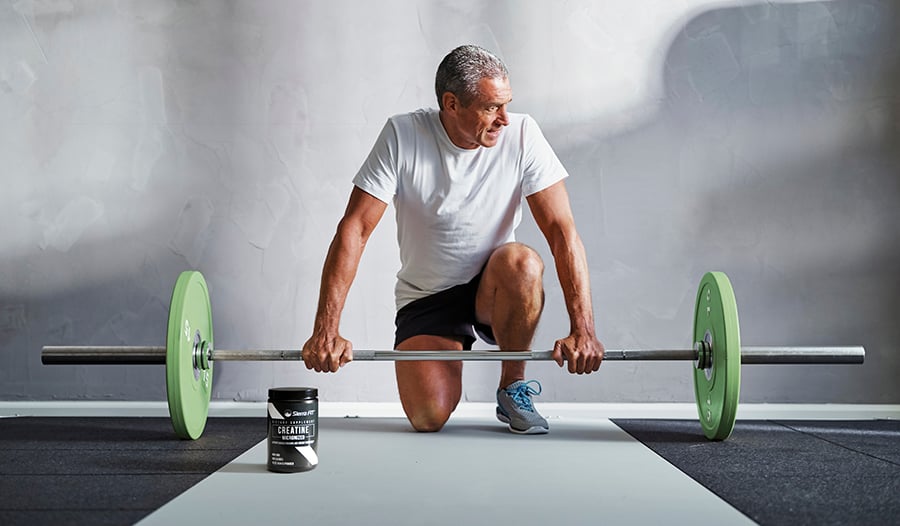 Creatine is a supplement often used by athletes and bodybuilders for high-intensity exercise to boost strength, resist fatigue, and improve recovery. Even though it’s one of the most widely researched supplements in sports nutrition, there are still a lot of misconceptions about it. So let’s debunk some of the most common myths about this popular supplement.

In reality, creatine is not even close in chemical structure to a steroid molecule. Creatine is a compound derived from amino acids. It’s found naturally in your body and in foods (like meat and fish). You store about 95% of your body’s creatine in your muscles. The remaining 5% is located in your brain, liver, and kidneys.

Creatine functions to supply energy to the cells of your body, especially those in muscle.  Adenosine triphosphate, or ATP, is the molecule that your body primarily uses for energy. Creatine contributes to increasing the body’s production of ATP.  So by providing increased ATP, creatine can improve workout performance.

‌‌‌‌Myth: You Can Use Creatine to Build Muscle Mass Without Working Out

Research has shown improved strength in those with muscular dystrophy who take creatine even though they weren’t exercising. However, in healthy humans, creatine consumption should be combined with resistance training in order to see an appreciable effect.

‌‌‌‌Myth: Take Creatine Before a Long-Distance Race to Run Faster

Consuming creatine as a pre-workout supplement prior to a long-distance race will not help your performance. While the benefit for high-intensity workouts is strongly backed by research, creatine has shown little effect on lower intensity endurance exercise. However, runners can benefit from creatine if they include high-intensity sessions in their training regimen. Using high-intensity training, runners can increase core strength, improve endurance, and enhance running performance.

The weight gain you see when initially starting creatine is not due to gaining fat but related to the increased water content in your muscle tissue. The creatine molecule strongly attracts water, pulling it into your muscles.

Over the long term, those using creatine may experience continued weight gain. However, this is generally due to increased muscle growth, not because of increased body fat.

Many bodybuilders who use creatine believe that creatine supplementation causes the body to hold extra water which impacts their muscle definition, making them look “soft.” So they stop taking creatine a few weeks before a competition.

However, as already described, the great majority of creatine is stored in your muscles. So it would be difficult to explain how it causes water to collect subcutaneously (meaning “under the skin”). It’s more likely that the “soft” look caused by subcutaneous water is not because of creatine itself, but related to use of a low-quality creatine product that may be giving you excess sodium.

Since creatine attracts water and gets stored in your muscles, many assume that creatine supplementation significantly increases your body’s water demand and predisposes you to become dehydrated and develop cramps. However, no research has shown that creatine causes cramps and dehydration. In fact, there is some evidence that it may help reduce the risk of these conditions.

A British Journal of Sports Medicine study revealed that taking creatine resulted in improved athletic efficiency in warm weather through the maintenance of body temperature by reduced heart rate and sweat rate. Another study on college athletes demonstrated that creatine users had fewer incidents of cramps, dehydration, or muscle injuries compared to non-creatine users.

For safe and effective workouts, you should make sure you stay hydrated, but there is no need to take in excessive amounts of water.

‌‌‌‌Myth: Once You Stop Taking Creatine, You Will Lose the Muscle You Gained

It is possible that your muscle size will decrease after you discontinue creatine. However, as long as you continue all other aspects of your regimen including adequate nutrition and resistance training, you can maintain your strength and dry muscle mass.

‌‌‌‌Myth: There Is No Need to Take Creatine as a Supplement Since it Is Found in Foods

While creatine does occur naturally in certain foods, you would have to consume an unreasonably enormous amount of these foods in order to achieve the same benefit as an average dose of a creatine supplement.

‌‌‌‌Myth: You Should Use this Newer Form of Creatine Because it’s Better Than Creatine Monohydrate

The vast majority (more than 95%) of studies on the safety and effectiveness of creatine have evaluated creatine monohydrate. Other forms of creatine are available which may have their own merits, but there is not nearly as much research on them.

‌‌‌‌Myth: In Order to Absorb Creatine Monohydrate Effectively, it Should Be Consumed With Sugar

Your muscle tissue is able to absorb creatine effectively enough on its own. Insulin can enhance the muscle uptake of creatine. But insulin only does this when present at very high concentrations.

In order to have any true effect on absorption, you would have to consume a fairly large dose (more than 100 grams) of sugar, or simple carbohydrates, which may not contribute to your health or athletic goals.

There is a popular misconception that creatine is only appropriate for male athletes and bodybuilders. However, other populations can certainly benefit. There is no evidence that creatine is unsuitable for women or even older adults.

‌‌‌‌Myth: Creatine Requires a Mega-Dosed Loading Phase When You Start Using it

The most common “loading protocol” is a daily dose of 0.3 grams per kilogram of body weight for 5–7 days. Thereafter, you take no more than five grams per day. But there is research showing that taking just three grams of creatine daily for four weeks can give you the same results as loading.

‌‌‌‌Myth: Creatine Should Be Cycled

Initially, experts recommended taking creatine for 2–3 months and then coming off it. This cycle was advised due to uncertainty about creatine’s safety. However, now that there has been abundant research, this is no longer a concern.

It had also been asserted that taking creatine for long periods might result in reduced uptake and effectiveness. But this, too, did not bear out in human studies.

Since creatine manifests its effects when it reaches a saturation point in the body, it would seem advisable to take creatine consistently.

One of the tests used to diagnose rhabdomyolysis, a condition in which muscle breaks down, is the level of creatine kinase (CK) in the blood. CK is an enzyme released by damaged muscles. While CK does show a slight increase with creatine supplementation, it is nowhere near the marked CK elevation associated with rhabdomyolysis.

‌‌‌‌Myth: Creatine Will Upset Your Stomach

While excessive doses of any supplement can result in digestive issues, recommended doses of creatine rarely cause gastric upset.  In one study, the recommended dose of five grams resulted in no cases of digestive distress. But with a 10-gram dose, the risk of diarrhea rose by 37%.

Thus, the recommended dose is 3-5 grams per day. Even if you’re loading with 20 grams daily, it is advised to split it into four doses of five grams over the course of the day.

‌‌‌‌Myth: Creatine is Bad for the Kidneys

Creatine can slightly raise levels of creatinine in your blood. Creatinine is a waste product created by your muscles. Healthy kidneys filter creatinine, taking it from your blood and delivering it for excretion through urine.

Doctors measure creatinine levels to get an idea of how well your kidneys are functioning. But a high creatinine level serves as an indicator of a potential health problem and is not necessarily a problem itself.

So while creatine supplementation may bump up your creatinine levels, that does not mean it is causing harm to your kidneys. Healthy kidneys are able to handle this extra amount of creatine.

Studies have shown that neither short-term, medium-term, nor long-term creatine supplements result in adverse effects on kidney function. There is little concern that creatine will damage your kidneys unless you have a pre-existing kidney condition.

Note: As with any change in diet or supplement regimen, you should consult your health care provider before you proceed with creatine supplementation. This is especially important if you are taking medications that affect blood sugar or affect liver or kidney function. Those who are pregnant or breastfeeding and those with any medical conditions should also discuss plans to start creatine with their health care providers.

This article was written by Venus Ramos, MD, a licensed physician in the specialty of Physical Medicine & Rehabilitation who received her medical training at Yale University, University of Miami, and University of California-Irvine.  She has a thriving medical practice in Southern California and has competed for 20 years as a national-level fitness athlete. A respected fitness trainer, her clients have ranged from single moms to professional athletes, and even an action film star. She offers readers a FREE 7-Step Blueprint to look lean and love life in just 25 minutes a day at doctorvenus.com. 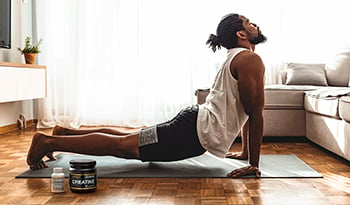 Recovery is an often-overlooked part of muscle building. Get expert advice on the best supplements to support your muscle recovery and growth. 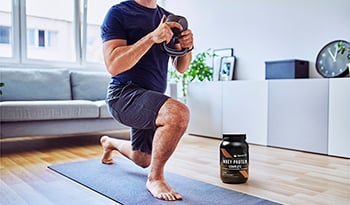 How Much Protein Do You Need for Weight Loss? 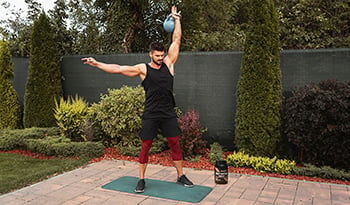 How To Track Your Progress When Bulking

Bulking or gaining phases can be counterproductive without a plan. Try these expert tips for tracking progress to mitigate fat gain and reach your goals.